🖤 Impact Of The ✊ Raised Fist Emoji On The ✊🏿 #BlackLivesMatter Movement 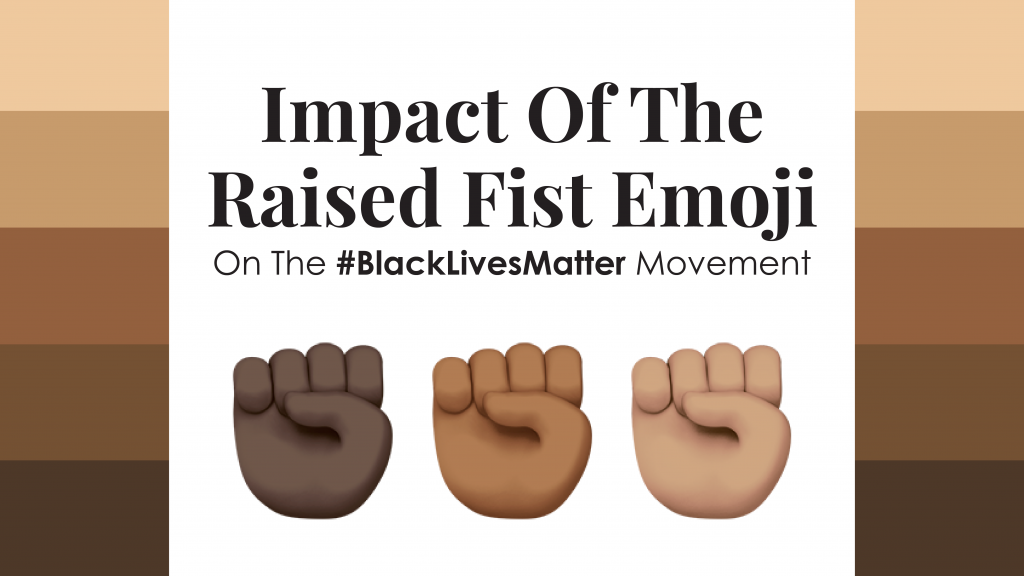 We’ve long used emojis to express and share our feelings when words can’t. But what happens when they take on a deeper meaning, become a symbol for an entire movement? If you’ve been active on social media in the past month, we know you know what we’re talking about. 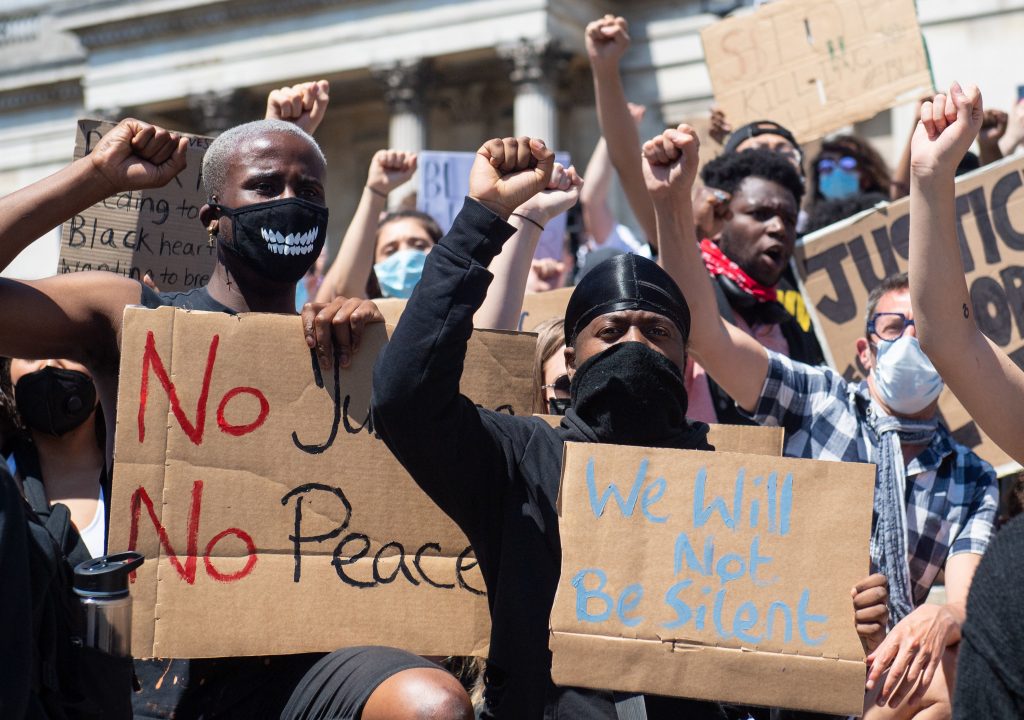 It’s hard to go anywhere without running into the clenched raised fist, and its animated version, the ✊ Raised Fist emoji, symbols representing the Black Lives Matter movement, an organized movement advocating for non-violent, civil disobedience in protest against incidents of police brutality towards the African-American people.

All over the world, people are protesting the killing of George Floyd. George Floyd was an unarmed Black man who died at the hands of Minneapolis police officer Derek Chauvin. Chauvin pressed his knee in Floyd’s neck for over 8 minutes, suffocating him. Floyd’s brutal death was video recorded. The video went viral, horrifying millions of people.

Ironically, George Floyd himself was against gun violence and the widespread gun violence that plagues many Black communities. In fact, his last video message before they murdered him was a plea to the young generation. He asked the youth to put their guns down. George pleaded with the youth to stop killing each other and come home to God.

As a result, many online and real-life protests are happening all over the world as a response to the killing of Floyd. In fact, as of this writing, 3949 cities and towns worldwide held protests and rallies.

This wasn’t the first time the Black Lives Matter movement, and the ✊ Raised Fist emoji or symbol was heard all over media. In 2013, the death of African-American high school student Trayvon Martin at the hands of Florida neighborhood watch captain George Zimmerman spurred a movement and first gave rise to a rallying cry that resonates with many today: #BlackLivesMatter. 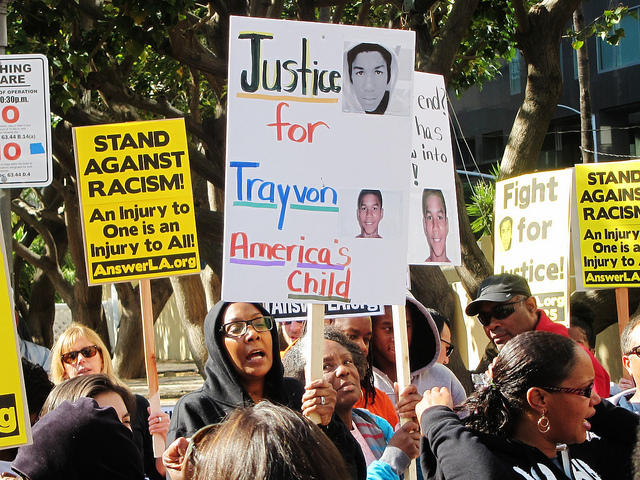 Today, people around the world are familiar with George Floyd’s tragic death; the Black Lives Matter movement and his death have sparked protests from Berlin to Mexico City. The cruel way he died has shocked the world. Maybe it’s just us, but have you ever wondered, out of all the emojis in the emoji verse, out of all the symbols in the entire world, why was the ✊ Raised Fist emoji used to represent the Black Lives Matter movement?

Significance Of The Raised Fist 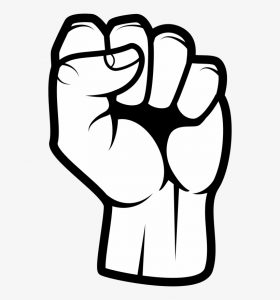 Perhaps this is why⁠—throughout history, the raised fist hand gesture, and the ✊ Raised Fist emoji has been used to show support and solidarity. The simple gesture of a clenched fist with the inside of the hand facing front, signifies many things. It symbolizes unity, strength, defiance, or resistance towards a certain belief, organization, movement, or cause. In fact, prominent data scientist Hamdan Azhar described the raised fist, and the  ✊ Raised Fist emoji as  a “signature emoji” of progressive protest.”

Azhar said this in relation to a study he made on the use of emojis in viral movements. He analyzed 60,000 tweets and hashtags about controversial topics to find out which emojis appeared the most frequently in these messages.

Some hashtags included in his study were #NoBanNoWall, #WomensMarch, #TheResistance and #BlackLivesMatter. The ✊ Raised Fist emoji was among the top 5 emojis that appeared in the protest-related hashtags he studied. 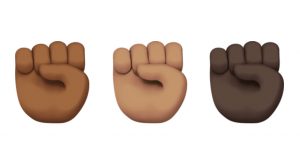 No ifs and, or buts about it – the ✊ Raised Fist emoji is a strong, powerful, and very relatable symbol. But did you know that this emoji is versatile, too? The symbol is available in various skin tones. You can choose from six skin tones to fit you or the one you’re sending the emoji to. Choices range from the default Yellow Skin Tone, the Light Skin Tone, to the Dark skin tone. Other options are the Medium Skin Tone, Medium-Light Skin Tone, and Medium-Dark Skin Tone.

Numbers don’t lie. You can’t bluff or manipulate your way around statistics, percentages, and graphs. With that in mind, in order to really understand the impact of the Black Lives Matter movement on social media, let’s go over some more studies made on Black Lives Matter emoji usage. Let’s begin with Twitter.

On June 3, 2020, website Emojigraph studied 162,021 unique tweets with the words “BlackLivesMatter or #BlackLivesMatter. The site discovered 61, 389 emojis and 1,236 unique emojis in those tweets. Out of all the emojis found in those tweets, the top emoji was the ✊🏽 Medium Skin Tone Raised Fist emoji, appearing in 4,522 tweets, or 7.37 % of the entire data. The second most popular emoji was the ❤️ Red Heart emoji appearing in 3,873 tweets, or 6.31 % of the chosen data. 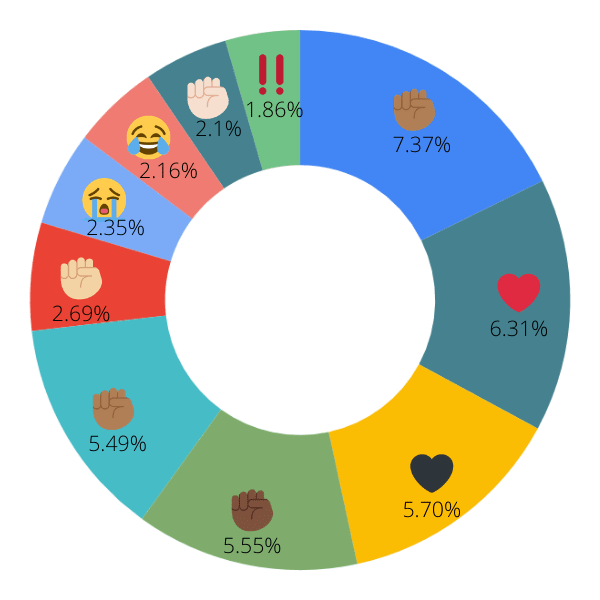 Overall, the top 18 emojis used in topics related to the Black Lives Matter Movement, all of which we ranked earlier, made up a whopping 50.88 % of the tweets sent on June 3, 2020. And out of those tweets, 10, 205 tweets had ✊ Raised Fist emojis. Needless to say, the #BlackLivesMatter Movement woke up Twitter users in a very, very big way. 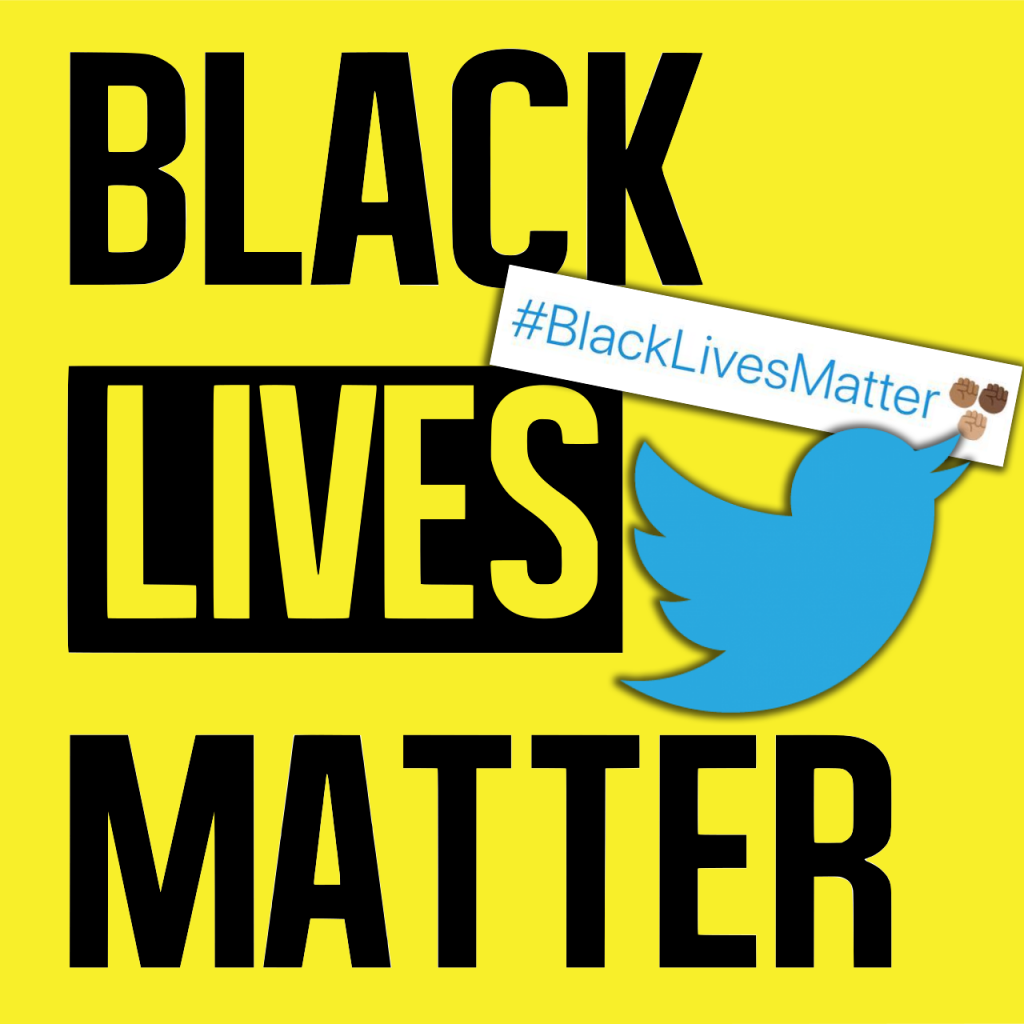 From Twitter users to Twitter management. Jack Dorsey, chief executive officer of Twitter has also lent support to the ongoing Black Lives Matter movement. He pledged $3,000,000 to an anti-racism organization started by former NFL quarterback Colin Kaepernick. Colin became a spokesperson for racial equality in 2016. During a football game, the quarterback sat on his team’s bench while the US national anthem played, as a form of protest against America’s treatment of racial minorities. 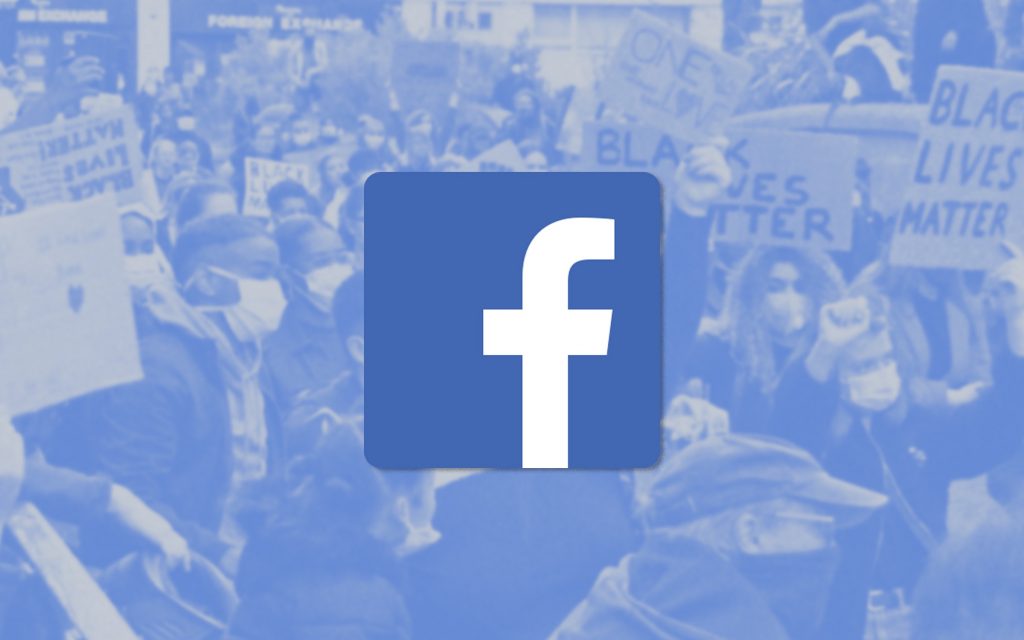 A similar show of support unfolded on Facebook last June 6, 2020. Mark Zuckerberg, Chairman and CEO of Facebook wrote a long and heartfelt post on his Facebook Fan page. He spoke out about racial bias, saying that everyone in his organization firmly believes that Black lives do matter.

At the end of his post, he gave a special message to Facebook’s African-American population: “To members of our Black community: I stand with you. Your lives matter. Black lives matter. We have so far to go to overcome racial injustice in America and around the world. We all have a responsibility and opportunity to change that. I believe our platforms will play a positive role in this. But we have work to do to make sure our role is as positive as possible. These ideas are a starting point and I’m sure we’ll find more to do as we continue on this journey. Thanks for all your input so far. I’m looking forward to making progress together over the coming weeks and months.” 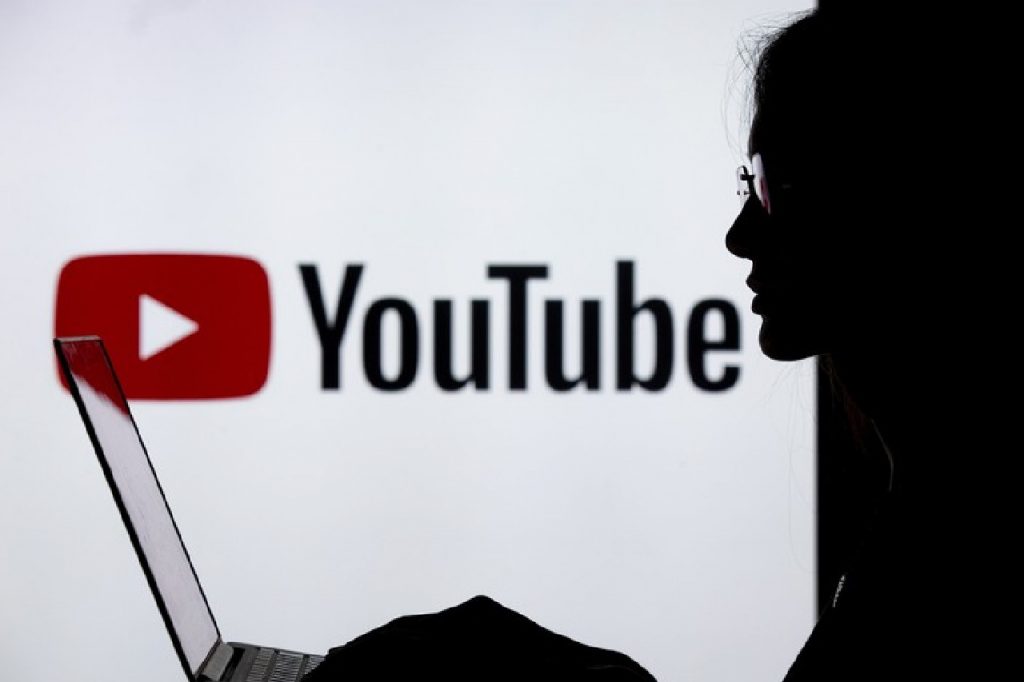 YouTube made a stand against racism and violence, too. CEO Susan Wojcicki made a post related to this on YouTube’s official blog last June 11, 2020. She announced that the online video-sharing platform allocated $100,000,000 to amplifying and developing the voices of African-American creators.

Susan also announced that YouTube’s Spotlight channel will be highlighting racial justice issues for the rest of the month of June. In line with this, the channel will also feature various perspectives from the Black community on YouTube through the production of historical content and educational videos. The goal of this initiative is to showcase relevant stories about the centuries-long fight for equality.

“We’ve taken many steps over the years to help protect diverse communities from hate and harassment across the platform, including Black creators and artists,” she mentioned in the post. “And last year, we developed more stringent hate speech and harassment policies. Our updated hate speech policy specifically bans videos alleging that a group is superior based on qualities like race, gender, religion, or sexual orientation to justify discrimination, segregation or exclusion.” 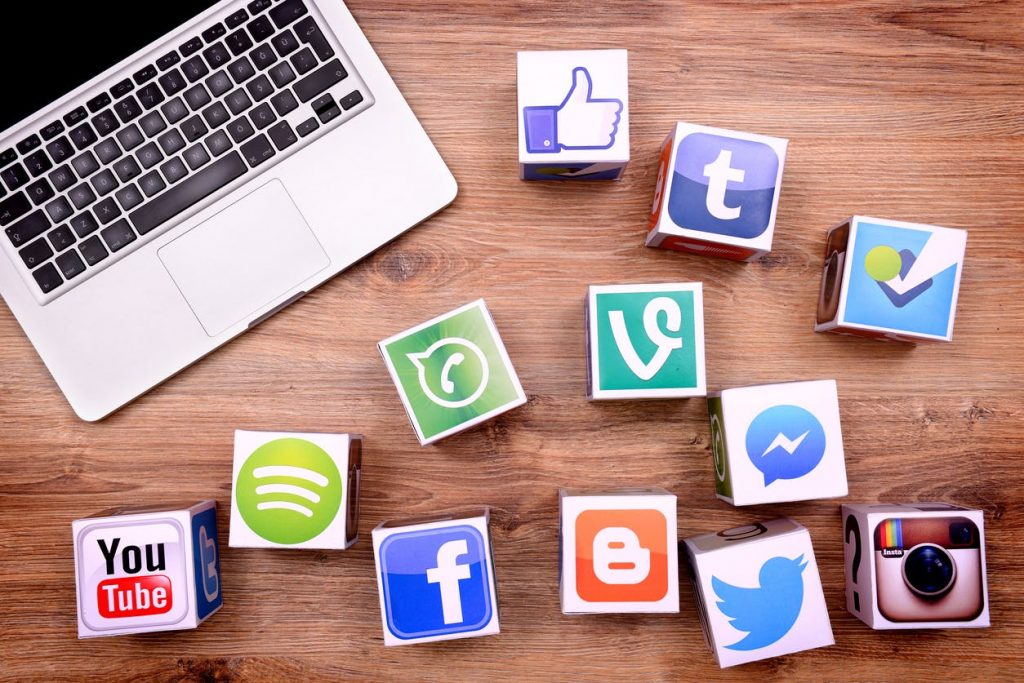 Daily diving into social media has become an important part of our lifestyle. Some people use it to begin or end their day. Others check their social media accounts multiple times a day⁠—catching up on the latest news, laughing at memes, taking quizzes, or just chatting with friends. Whichever way you look at it, social media has made our lives connected and more convenient.

Despite the undeniable presence of social media in our lives, some people in the medical field see the negative effects of it. Some mental health professionals believe that people who regularly use platforms like Twitter, Facebook, or Instagram are more stressed than those who don’t. In fact, the University Of Missouri released a study recently. The study said that people who use Facebook to envy other people’s lives were more susceptible to depression. 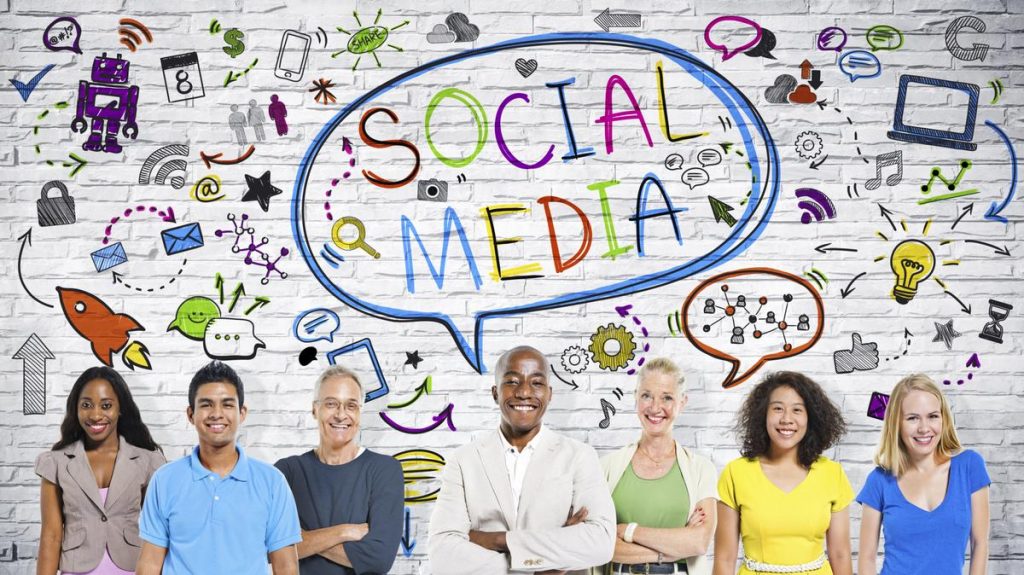 Photo from The Business Journals

There lies the rub. This shows that social media⁠—and all that comes with it⁠—posts, emojis, reactions etc, is not harmful. How people use social media is what makes it either bad or good. When we use social media as a platform for positive change, like bringing awareness to the Black Lives Matter movement, something inside of us changes, too. Doesn’t it feel good when you do good? When you make the world a better place, you become a better person, too. Isn’t that an awesome way to live? 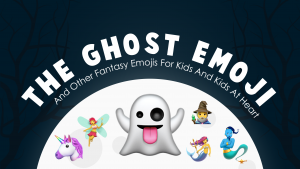 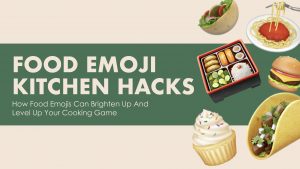 🍔 Food Emoji Kitchen Hacks: How Food Emojis Can 🍭 Brighten Up And 🥠 Level Up Your Cooking Game 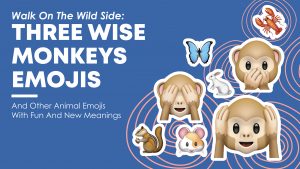 Walk On The Wild Side: 🙈🙉🙊 Three Wise Monkeys Emojis And Other 🐿️ Animal Emojis With 🐇 Fun And New Meanings